The “steeping” method for e-liquids is almost as old as vaping itself. Even in the early stages of e-liquids, consumers were always keen to get the most out of their vaping sessions and to generate the greatest possible experience. Sure, those who go out to eat these days are not satisfied with a third-rate steak or a frozen pizza from an Italian. And this is exactly where the “steeping” starts. But what exactly does “steeping” actually mean? How can I give my e-liquid even more flavor? We want to clarify exactly these questions in the following.

If we translate the word steeping or “to steep” directly, we don’t really get smart yet. After all, the verb to steep means something like ‘soak’, ‘impregnate’ or ‘water’. Incidentally, this translation is rather misleading, since we don’t want to make our taste watery, on the contrary, we want to get the maximum taste out. So let’s look at the everyday usage of the word “steeping”.

So here we will find that steeping means something like “let go” and we are getting closer to the whole thing. Incidentally, we generally use the word in connection with food, for example brewing tea. In addition, everyone will probably have noticed at some point how a chili con carne, a soup or even a stew only got better when we reheated and ate them a few days later.

So what does this mean for our e-liquids?

Well, the “letting go” method can be applied roughly analogously to e-liquids. The longer we leave an e-liquid untouched, the better it will develop in terms of taste and the better your vaping experience with the desired flavor will be. The reason for this is that the components of the e-liquids (PG / VG, aromatic substances, nicotine) only mix perfectly after a certain time and thus develop their maximum potential. In addition, certain mixtures often contain traces of alcohol, which also only evaporates after a certain period of time.

So how exactly does “steeping” work?

Basically, we differentiate between three methods: steeping, breathing and streathing. In the following we want to briefly discuss each of the three methods and bring them a little closer to you.

Basically, you only need two things for this: a cool, dark storage room and a lot of time. The more patient you are with the steeping process, the better the flavor will be able to develop inside your vial. At this point, however, we want to mention that there will also be individuals who prefer the fresh product to the matured one. Incidentally, to speed up your process a little, you can shake the vials vigorously several times a day. This means that the individual components mix better.

Heat also speeds up the process. For example, you can hold the bottles under warm tap water. As a result, the individual molecules move faster and mix more easily. 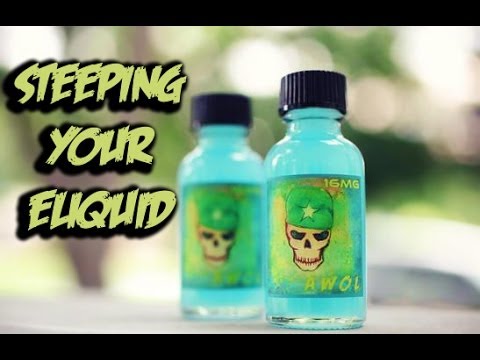 As the name suggests, this method tells you to let your e-liquid breathe. Open the vials and leave them there for a few hours. Caution: Breathing that lasts longer than 12 hours carries the risk that flavor aromas and nicotine will evaporate and you will have to accept losses in terms of taste. We therefore recommend under no circumstances to exceed this period.

This term simply describes a combination of the previous two methods and will give you the best results. To do this, shake your bottle, hold it under water and then remove the lid. Then let her breathe in cool and dark for about two hours and repeat this process a few times.

Tip: You will achieve even better results if you remove excess air after each process, for example with a nipple.

We recommend all lovers of more taste to try the methods described. By the way, fruity flavors require the least steeping time, whereas tobacco flavors and especially “creamy dessert” flavors take a longer time. Some people are satisfied with a steeping time of a few days, while others let their e-liquids mature for several months. The best thing is to try it out for yourself and find your own personal preferences!